All Pies & Pints locations are open for Carryout and DoorDash* delivery (where available) only. Our temporary hours of operation are from 12pm-8pm, with the exception of our Charleston, WV, Morgantown, WV, and Richmond, VA locations, which are open 11am-9pm. Please check our Facebook page for more information.

Below you will find informative descriptions of all the different styles of beer available at our various locations. View a current beer & wine list by visiting our menu page. 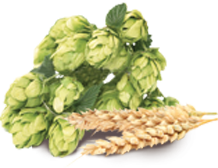 Contrary to popular belief, the biggest difference between these two broad categories is the strain of yeast and the temperature of fermentation chosen by the brewer. Ales can taste like lagers and vice versa. Color, alcohol content, bitterness and malt character can run the gamut for both. In practice, what matters is not whether a beer is an Ale or a Lager, but whether it is enjoyable to drink.

What’s in a style?

Hoppier and slightly more alcoholic than its English cousin, this style was one of the original staples of the American craft beer revolution, and generally features American-grown hops and a clean, crisp, slightly hoppy, slightly roasty flavor profile. (e.g. Rogue Hazelnut Brown Nectar)

Hoppy, crisp, and delicious, an American revival of an English style, but with more hop aroma and bitterness, along with a moderately higher alcohol content. (e.g. Flying Dog Snake Dog IPA)

Generally a catch-all term for beers that don’t quite fall into more traditional styles. Color, bitterness and mouthfeel varies greatly between examples. High alcohol content tends to be the glue that bonds the style together. (e.g. Flying Dog Double Dog)

Created by the renaissance in response to the price of imported French wine, this style always brings a fairly aggressive alcohol content, with flavor and aromatic profiles ranging from quite bitter to nearly balanced to complexly malty. (e.g. Sierra Nevada Bigfoot)

An umbrella term for the myriad of traditional and rustic Belgian beers that tend to fall outside or in between traditional styles. Often including the use of wild yeasts and/or old-school methods, these beers are refreshing, layered and extremely complex. (e.g. Orval)

Featuring the fruity and spicy complexity of Belgian yeast, with a citrus/piney goodness of American hops, this style is brewed on both sides of the Atlantic and often features an assertive alcohol content. (e.g. Flying Dog Raging Bitch)

Richly malty, this beer was originally the pride of Einbeck, Germany. Bready, caramel, toffee-like flavors tend to shine through in the majority of examples, with correspondingly low levels of bitterness. Doppelbock is the big brother of bock, and features even more malt flavor, complexity and alcohol. Doppelbocks also carry names that end in the suffix –ator. (e.g. Ayinger Celebrator)

Not your grandma’s cider. This fermented beverage was once America’s most popular alcoholic beverage, and is now enjoying a modern-day renaissance. Flavors can range from quite sweet to aggressively tart, with alcohol content spanning the spectrum between quite low and aggressively high. (e.g. Samuel Smith’s Organic Cider)

Another catch-all term for the beers produced for industrial workers in the northern and southern parts of England. Easily drinkable in moderate quantities, without sacrificing flavor or complexity, these beers tend to show caramel malt sweetness, dark fruit notes from their yeast strains and varying level of earthy bitterness. (e.g. Newcastle Brown Ale)

Generally featuring sorghum instead of traditional malted barley/wheat, these beers extend the pleasure of consumption to our friends with allergies to gluten. These beers also tend to be more indicative of those consumed in global regions where barley is not cultivated, such as various parts of Africa. (e.g. Green’s Gluten Free Amber)

Beers falling into these styles represent the oldest and most traditional of existing beer styles. Always including the use of wild yeast and bacteria in their production, these beers show wondrous characters of tartness, farmhouse “funk” and almost wine-like complexity. Thankfully these nearly-lost beers are enjoying an exploding popularity in the U.S. both in terms of their consumption, as well as production by craft brewers. (e.g. Lindeman’s Cuvee Rene Gueuze)

Developed in 18th century England as a combination of various beers for the multitude of train car porters in London. This style can include beers that range from coffee-like to caramel, often with a just-short-of-balancing hop bitterness. (e.g. Sierra Nevada Porter)

Originally a derivative of Porter, stouts can run the gamut of flavors, from light and dry, to richly malty, to almost espresso-like. Bitterness is often derived more from the choice of roasted malt than from hops. Alcohol content can range from quite low to aggressively high. (e.g. Samuel Smith’s Oatmeal Stout)

A catch-all term for beers whose ingredients include a significant portion of wheat, and fall into three main categories:

Developed in the American northwest in the early 1980s, this style is crisp, refreshing and enjoyable; showing a slight tartness and light notes of banana and citrus at times. (e.g. Widmer Brothers Hefeweizen)

A once nearly-extinct style, revived in Hoegaard, Belgium in the 1970s. These cloudy beers often show aromas of coriander and citrus, followed by flavors of the same. Their dry, lightly citrusy finish refreshes the palate. (e.g. Hoegaarden)

A style that features the wonders of yeast. Banana and clove aromas and flavors illustrate the impact of the aforesaid to the creation of our favorite beverage. A hazy appearance, light mouthfeel and crisp, refreshing finish often typify the best examples of the style. (e.g. Ayinger Bräu-Weisse) 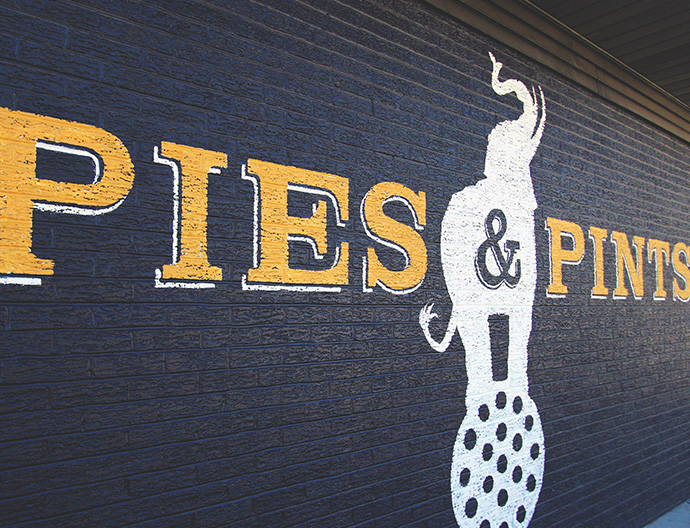 Effective Wednesday, March 18th, all Pies & Pints locations will be open for Carryout and DoorDash* delivery (where available) Only. Keeping the safety of you and our team members in mind, we have indefinitely suspended in-store dining until we feel that it is completely safe. Our temporary hours of operation are from 12pm-8pm, with the exception of our Charleston, WV, Morgantown, WV, and Richmond, VA locations, which are open 11am-9pm. Please check our Facebook page for more information.

We cannot stress enough how much your continued patience and support means to us. We are doing everything in accordance with local, state and federal health officials to get past this as quickly as we can.

Please stay safe and continue to support local businesses as much as possible!